Computer Troubleshooting: How to Approach?

Computer Troubleshooting and How to Fix Them?

When your computer decides to act up, how do you find out whether it’s a hardware problem or a software problem? In the following paragraphs, we will be deliberating upon various tips about Computer Troubleshooting which will help you to determine the cause of the problems in your computer. Let us try the symptomatic approach. 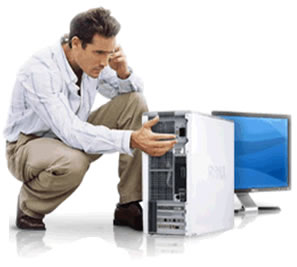 When your computer has slowed down:

Computer magazines and knowledgeable people often talk about older computers being slower. If you aren’t that familiar with computers, you may misinterpret what they actually mean. Let us do the Computer Troubleshooting.
A computer can be slow in two ways. One way is when it takes too much time to complete simple, everyday tasks such as starting up or opening programs. The second way is when it grows obsolete because modern programs make demands that it can’t meet. An obsolete computer doesn’t exhibit slowness when performing everyday tasks.
Any computer even older than 10 years should be able to start up in one minute and quickly load commonly used programs as long as it runs an OS that it was designed for. If you find that your computer takes much more time than it did before to merely start up or to fire up programs, the problem isn’t usually the hardware. You may have malware or some sort of operating system housekeeping problems. Cleaning up the browser cache, defragmenting and running your antivirus program should take care of such glitches. You don’t need to buy a new computer just because it seems to have slowed down.
If your computer’s components are too slow for modern programs, the problem usually appears as a complete inability to work rather than a general slowness. For instance, if you run a Celeron from 2007, you’ll find that while browsers do open quickly, they aren’t able to play high-definition YouTube videos at all. It is when you see such complete inability to function that you should consider your computer old enough to replace. There’s an easy way to tell if your computer’s slowness comes from obsolete hardware — simply go to the Task Manager and check out your CPU graph. If it is at or near 100% most of the time, your computer can no longer keep up.

In the past, blue screen crashes i.e when your computer spontaneously crashed after a brief blue-colored error display, used to be a Windows problem. They were so common and such a drag on Microsoft’s reputation that hundreds of jokes about it, circulated on the Internet. These days, though, Windows is a stable OS that rarely crashes on its own. If your computer has a frequent blue screen problem, the problem is usually hardware related or related to poorly programmed drivers that come with low-quality hardware. You should check either recently added hardware or recently installed drivers. If neither seems to be a problem, you can safely assume that you have failing hardware — the motherboard, a graphics card or anything else.

If your Computer refuses to start:

A computer that’s completely dead always has a hardware problem – it could be as simple as loose connections within the computer or as complicated as defective hardware. If your computer starts but doesn’t go as far as fully booting up, it could either be the hardware or the software. You could try repairing your Windows installation or reinstalling Windows to see if it fixes the problems you experience.

Computer Troubleshooting can be a Trial-and-Error Process:

It can take a great deal of patience to narrow a computer problem down. The easiest way to tell if it’s the hardware or the software that’s at fault on a particular problem is to reinstall Windows. If the problem persists, you can safely assume that you have a hardware problem.
Hardware problems don’t always have to be major ones. If you have a frayed-out or rat-bitten cable going from your graphics cards to your monitor, for instance, it can make your computer spontaneously crash. Narrowing down a computer hardware problem can be painstaking work.

Computer Troubleshooting can be at times fun, and you may derive lots of personal satisfaction if you are able to find out yourself the cause of the problem and resolve it. It is a matter of approach and an attitude in you for such tasks.

How to Clean Laptop Screen at Home using Household Products

Memory Storage Devices of Computer and its Different Forms

Basic Parts of Computer and their Various Functions