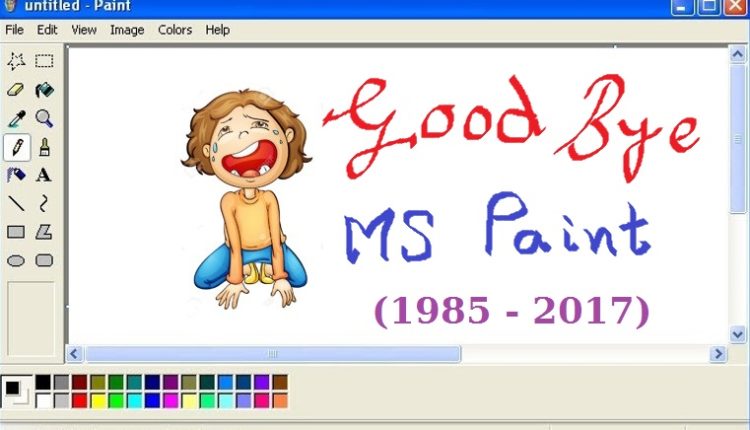 Most popular graphic editing application of Windows, popularly known as Microsoft Paint, has been checked to be terminated. Time is ticking. It’s going to become obsolete very soon from now.

Its matter of time that, Microsoft Paint will find its natural death after serving the populace for so long since 1985.

MS Paint found its birth from the very first release of windows series Operating System from the Microsoft in its pioneer version Windows 1.0.

Since then, it has marked its presence in all the further versions of Microsoft to name the few, Windows 95, Windows 98, Windows NT, Windows 2000, Windows XP, Windows 7, Windows 8 and now Windows 10.

It has been full 32 years of its longevity and Microsoft Paint is perhaps one of the few very popular application of Microsoft which found it usage across all the age group.

Recommended for You:
How To Create Small URL
How To Clean Laptop Screen

I use Microsoft Paint even today for a quick image resizing and minor editing works. It is very handy and a convenient tool.

It is rumored that Microsoft is going to release a major update of Windows 10 by the name ‘Creators Update’ and will add up a host of features to the operating system. This update is likely to bring an end to this gorgeous application called MS Paint or Microsoft Paint.

Microsoft in its new OS Windows 10 has already introduced its new Avatar named Paint 3D.  It finds it place in the traditional functionality of MS paint along side the 2D and 3D editing capabilities.

Microsoft Paint has been a popular learning tool for children who wanted to have their first experience on computers. They could scribble something out using their mouse and get a feel of the power of the computer.

On the news of the planned demise of Microsoft Paint, there is a mixed feeling in my heart. An application who has been so close to our hearts for years is going for our betterment. It’s going for the NEW, CANDID and the ADVANCED.

How to Migrate WordPress Multisite Subdomain to a Single Site

How to Make Money with Google Adsense without a Website